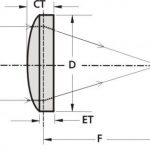 These lenses focus parallel beams to a light spot. This spot is a real image that can be projected on a screen or manipulated with a space filter like a diaphragm. The asymmetry of a plano-convex lens minimizes spherical aberrations when either the object distance or the image distance is more than 5 times the other. To minimize aberrations a plano-convex lens should be placed with the plane side pointing to the closest conjugate point – an object or an image whatever is closer.

These symmetrical lenses also possess positive focal lengths and produce real images of distinct objects. However theses lenses minimize the spherical aberrations for nearly symmetrical positions of the conjugate points with respect to the lens. For exactly symmetrical imaging with a 1:1 magnification not only the spherical aberration is minimized, but also coma and distortion are completely eliminated. As a rule of thumb the bi-convex lenses are best used for magnifications between 1/5 and 5. 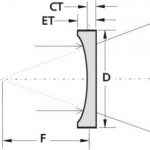 Concave lenses convert incoming parallel rays in diverging ray bundles that seem to originate from a single point in the object space – the so called imaginary focal point. Like plano-convex lenses these lenses minimize aberrations for absolute conjugate ratios more than 5 or less than 1/5. For this, plano-convex lenses should be placed with parallel beam entering the curved side of the lens. However such an orientation of a lens may be disadvantageous and even dangerous when a plano-concave lens is used to diverge a high power pulsed laser beam. A rest-reflexion from the curved surface will produce a real secondary focus that can damage optical elements preceding the concave lens or even causing a laser break-down at this point. By high power applications the concave surfaces should be oriented in such a way that a secondary focus is avoided.

These lenses are similar to plano-concave lenses and are best used with absolute conjugate ratios between 1/5 and 5. Bi-concave glass lenses are manufactured with both surfaces concave. These lenses have negative focal lengths.
These lenses diverge collimated incident light and form virtual images, which are seen through the lens. They are used in f.e. laser beam expanders, optical character readers, viewers, and projection systems.

Use Achromat lenses to minimize or eliminate chromatic aberration. The achromatic design also helps minimize spherical aberrations. An Achromat Lens, is designed by either cementing two elements together or mounting the two elements in a housing, creates smaller spot sizes than comparable singlet lenses. Achromatic Lenses are ideal for a range of applications, including fluorescence microscopy, image relay, inspection, or spectroscopy.

Achromatic doublet lenses (“achromat”) are designed to eliminate chromatic and spherical aberrations inherent in singlet lenses. When used on-axis, an achromatic lens focuses an parallel input beam to a perfect “point”, limited only by the effects of diffraction. This performance can be achieved over a broadband of wavelength. Achromatic lenses can be used to collimate and focus laser beams. They can also be used for high-quality imaging on-axis. However, the off-axis performance is significantly worse than the on-axis performance. If your application requires good optical performance off-axis as well as on-axis, multi-element lenses such as our digital imaging lenses are recommended.

For some applications it is desirable to have a high-quality lens with a lower f/# (for example, collimating a diode laser with large divergence angle). This can be done by adding a matching aplanatic meniscus lens to a doublet lens. An aplanatic meniscus lens will shorten the focal length of the doublet lens (thus, lowering the F-num) without introducing additional spherical aberrations.