OZ Optics introduces a new tunable filter, with the ability to tune both the center wavelength and the transmission bandwidth. Two independently adjustable thin-film filters allow the user to set the lower and upper edges of the pass-band region. 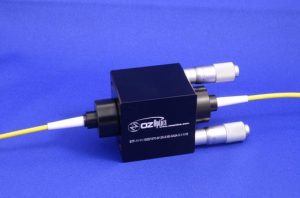 With this method, the user can tune the pass-band from 1nm to 18nm FWHM and shift the center wavelength by over 40nm. The transmission band features a flat-top profile, providing uniformly low losses, and low PDL across the pass-band region, and high rejection ratios outside the pass-band. Devices can be custom made for wavelength regions of interest and can use either singlemode or polarization maintaining fibers.

The current version uses two manual controllers to set the upper and lower pass-band regions. An electrically controlled version is planned for later this year. Applications include WDM testing, spectral filtering, spectral imaging or microscopy, and others.